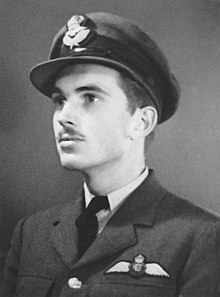 Pilot John Gillespie Magee wrote the poem, High Flight after taking his Spitfire on a test flight. He served with the Royal Canadian Air Force (RCAF) 412 Squadron at RAF Digby, near Sleaford, England.

He was a US citizen who crossed the border to Canada when he was 19 to join the RCAF. Within a year he was sent to England and posted to the newly formed 412 Fighter Squadron, which started operations at Digby on June 30, 1941. He role was to fly fighter sweeps over France, and provide air defences over England against the German Luftwalfe.

Magee died over Lincolnshire, age 19, on December 11, 1941 in a mid-air collison with another air craft, and Oxford trainer from Crdanwell, flown by Ernest Aubrey. Magee was buried at Scopwick Cemetery, near Digby on Dec 13, 1941, where his coffin was carried by pilots from his own squadron.

Oh! I have slipped the surly bonds of earth,
And danced the skies on laughter-silvered wings;
Sunward I’ve climbed, and joined the tumbling mirth
Of sun-split clouds, –and done a hundred things
You have not dreamed of –Wheeled and soared and swung
High in the sunlit silence. Hov’ring there
I’ve chased the shouting wind along, and flung
My eager craft through footless halls of air…
Up, up the long, delirious, burning blue
I’ve topped the wind-swept heights with easy grace
Where never lark or even eagle flew —
And, while with silent lifting mind I’ve trod
The high untrespassed sanctity of space,
Put out my hand, and touched the face of God.

John Gillespie Magee was born in Shanghai, China, to an American father and a British mother, who both worked as Anglican missionaries. His father, John Magee, Sr., was from a family of some wealth and influence in Pittsburgh, Pennsylvania. Magee Senior chose to become an Episcopalpriest and was sent as a missionary to China. Whilst there he met his future wife, Faith Emmeline Backhouse, who came from Helmingham in Suffolk and was a member of the Church Missionary Society. Magee’s parents married in 1921, and their first child, John Junior, was born 9 June 1922, the eldest of four brothers.

Magee began his education at the American School in Nanking in 1929. In 1931 he moved with his mother to the UK and spent the following four years at St. Clare, a boarding school for boys, near Walmer, in Kent.

Magee visited the United States in 1939. Because of the outbreak of World War II, he was unable to return to Rugby for his final school year, and instead attended Avon Old Farms School in Avon, Connecticut.[5] He earned a scholarship to Yale University in July 1940, but did not enroll, choosing instead to enlist in the Royal Canadian Air Force in October of that year.

Shortly after his promotion to the rank of Pilot Officer, after having been awarded his wings, Magee was sent to Britain. He was posted to No. 53 Operational Training Unit (OTU) at RAF Llandow, in Wales. After graduating from No. 53 OTU, Magee was assigned to No. 412 (Fighter) Squadron, RCAF,[1] which was formed at RAF Digby on 30 June 1941, and where he became a qualified Spitfire pilot.